The Spirit of Adventure

﻿﻿﻿﻿﻿﻿﻿﻿﻿﻿﻿﻿﻿﻿﻿﻿I was sipping a cider the other day, feet up, time on my hands, waiting. Waiting along with what seems to be the whole of ciderland. Waiting for fermentations to come to an end, and the brief excitement of racking, blending, tasting to begin. Tum-ti-Tum!

My idle thoughts turned to pondering one of the great imponderables of the cider world. Just what will be the next great 'Phenomemon' in cider drinking! Hmm!
﻿﻿﻿﻿﻿﻿﻿﻿

The Cider Over Ice phenomenon which started it all has just about melted away now. Pear Cider?... soooo 2010. Fruity Ciders, meh! So where will the bright young things in the marketing departments take us next I wondered. Hmm!...
How about the tropical isle of Barbados?...

...or maybe the Peat and Sea-spray of rugged Islay?

What about sun-baked Jerez?﻿﻿﻿﻿﻿﻿﻿﻿
﻿ ﻿
You see it's Spirit Casks that I'm thinking of. Ex-distillery Rum and Whisky Casks in particular. Old news in the Craft Cidermaking world, but shiny, bright and full of sales potential for the lumbering giants of Industrial Cider. You read it here first.
Of course spirit cask ciders are hardly a new thing. Traditional cidermakers have been using ex-distillery casks to ferment and mature their ciders in for as long as they've been available. In fact before the widespread availability of cheap plastics, stainless steel and glass for fermentation and storage, practically all cider was made in wood, albeit often Sherry or Port pipes. So what's the big deal then?

Maturing cider in ex-distillery casks can add a whole new dimension to their contents. At its best, it can produce an award-winning cider such as the Rum-tinged beauty from Green Valley I tasted at a festival last year. But the practice also divides opinion amongst cider drinkers. Whiskey character is definitely an acquired taste, and in my opinion more of a clash of flavours than one of harmony. Rum character on the other hand is generally seen as being very complementary to the taste of a good cider, particularly those made from bittersweet cider apples. But even Rum Cask Ciders have their detractors, and as with most things in cidermaking, a light touch often produces the best results. A full-on Rum character can swamp the flavour of even the most robust ciders, and in my opinion the delicate flavour of perries do not stand up to the addition of any spirit character.

So a little bit of controversy too, which is of course even better for the flash suits in the marketing dept.

Now this got me thinking. We've been a little slow with previous cider phenomenons, and I don't want to get left behind with this one. I'm confident that the Gaudy Marketing Bandwagon is being hooked-up to the Wild Stallions of Passing Fashion even as I sit here writing this, so we're jumping on right now before all the good seats are taken. Now we don't have any spirit casks, and have no intention of getting any (I don't really like spirit cask ciders to be honest...), but that isn't going to stop us developing our very own Rum 'Character' Cider. At the risk of squandering our solid-gold marketing advantage, here's how we've done it: 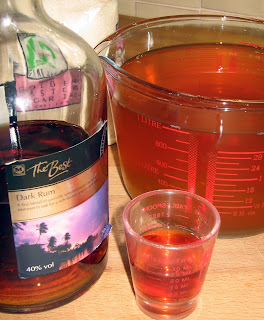 For every litre of cider, add 20ml of a reasonable quality Rum, a bit of sugar to bring out the 'Authentic Rum Character', shake around for a bit, leave to mature for at least and hour, enjoy.
We're calling this latest potential Cash-Cow our Rockingham Forest Little Rum 'Un Cider, which we think accurately reflects its almost total lack of 'Heritage', 'Authenticity', and other things which sound good in the trade magazines. I'm afraid that if you want to try this unique 'Limited Edition' cider (ooh! that sounds good too), you'll have to be quick. A single bottle will be available for tasting at the Derby CAMRA Cider Bar tomorrow afternoon. Get it while you can.

I concur with your opinions on whiskey and rum flavours in cyder as I have experimented with both. I wonder if your recipie is a statement of an opinion?- Some rum casks I have used contained 'ullage' when delivered which makes me wonder about compliance with notice 162 when used. OK one is not physically adding anything to the cyder, simply passing it through a vessel as part of its storage, but it picks up those flavours and I wonder about increase of ABV. I can see cask maturation being appealing to some as you can dress up a poor product using cask flavours, but the timescale for the maturation and the number of casks needed for bulk would be a logistical nightmare on a large scale. Therefore your recipie might be far more appealing on an industrial scale. I seem to remember my mum using rum essence in cakes, which like toffee flavour (used by some in cider) would put the product into the made wine duty bracket, if used but could work out alot cheaper than casks and time to mature..

I think as far as HMRC are concerned, it's a bit of a grey area. Clearly spirits are not on the permitted ingrediants list, but as you know, the practice is widespread amongst craft producers, many of which are duty exempt.

I like Rum Cask ciders when the Rum character is carefully judged, ie. just a hint. I've had some truly awful Rum-soaked ciders, and some barely drinkable Whiskey-ruined perries, but that's just my opinion.

If you're a fan of spirit cask ciders, it doesn't have to be a big investment, since a little can go a long way. I've considered getting a single cask, using the resulting cider for blending, but I just don't like the character enough to be bothered. Rum essence would suit the big-boys perfectly though, certainly cheaper than using real spirit.

I wonder what Julian Temperley does with his ex-Cider Brandy casks?

Now thats a nice idea, Cider Brandy Casked Cyder. I have shifted to ex wine casks. Someone pointed out to me that the distilleries use casks until they are only fit for scrap. For once all the flavours have been stripped from the oak it is still a good neutral flavour vessel and you still need to be able to blend the depth of the oak so you need neutral casks as well. French wine casks are usually disposed of after 2 or 3 years as the levels of oakiness remaining is too low to cut it in high tannin reds. But these casks still have alot of life in them, still confer oak to a cyder and can add vinous qualities also.