...from all at Rockingham Forest Cider (with a little 'Easy-Listening' help from the legendary Bert Kaempfert and his Orchestra). This rotating nativity scene is a bit like our fermentations. Reluctant to start. Liable to grind to a halt at any given time! 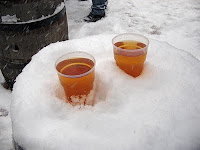 In the bleak midwinter there's nothing I like more than standing knee-deep in snow, inadequately dressed for the weather, nursing an ice-cold Weissbier in frost-bitten, gloveless hands. Sounds a treat doesn't it? Did I mention Birmingham as the venue? Mmmm!

I like Birmingham. It's really come on in recent years. A little bit London only a little bit friendlier. Full of Brummies rather than Londoners... I'll say no more. I like Frankfurt too, though sadly I've never had the opportunity to go there yet, so I'm basing my view of Frankfurt on Birmingham. Naturally!

Throughout the month of December, Birmingham does a pretty passable impression of Germanys fifth largest city, decking itself out in Singing Mooses and Rotating Santas at its annual Frankfurt Christmas Market (the clue's in the name). Possibly the best German Christmas Market outside of Germany itself, certainly better than the lame or non-existent offerings I've visited in other Midlands cities recently (you know who you are...). 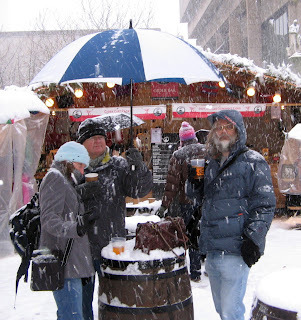 This was my first visit to the Birmingham event, and probably the first time it's been forced to close early due to a totally expected heavy snowfall. Apparently things got pretty treacherous later in the day, but there's no doubt the sub-zero temperatures and thick carpet of fluffy snow made it a very Christmassy Christmas Market. It also made Mulled Cider the drink of choice (or at least one of the drinks of choice) for cold toes and chilly noses. One of the big attractions of this Christmas Market is the numerous speciality bars set up around the site. Plenty of German Beer to be sure, Gluwhein for those that like it, but also real ales from Woods Brewery, and excellent cider and perry from Hogan's of Warwickshire, and Orchard Pig of Somerset.
The Orchard Pig Cider Bar had their award-winning draught cider, cockle-warming mulled cider, and a selection of snow-covered barrels to stand around. 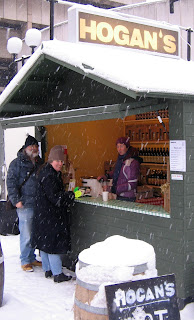 Concentrate really hard, and it's almost like standing in a Somerset cider barn on a hot Summer day... well, almost. Top Somerset Cider nevertheless, if we can just persuade them to come to Leicester next year...
Warwickshire was slightly easier to visualise at the small, but perfectly formed Hogan's Cider Bar. More of that lovely Mulled Cider was available, plus bottles of the outstanding Hogan's Perry for those who needed cooling down. More snow-topped barrels to stand around, and by now the the silly animal hats were starting to make an appearance. Well done Hogan's, and well done too Birmingham Wetherspoon for helping out with the necessary comfort breaks. 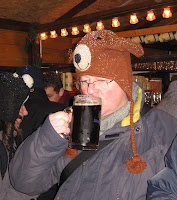 It was getting really, really cold by now, so off to the Kölsch Bar for an ice-cold Schwarzbier. Brrr! It was slightly warmer at the back of the hut, but by now a group of lively Brummie gentlemen had started singing, so we headed next door for a chilled Weissbier at the sign of the Singing Moose..... outside!..... in the snow!.... Why! 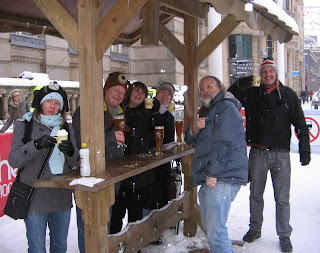 It was time to beat a retreat to one of the city's noted hostelries. The cider selection at the Wellington was disappointing, but the Wye Valley HPA was in superb condition, and more importantly, not ice-cold. We'd thawed enough by now for the short trip to the palatial splendour of the Old Joint Stock, for some top quality London beer... oh well, can't win 'em all.
I'll skirt quickly over the 'Total and Utter Shambles of Disorganised Chaos at Birmingham New Street Station', and say what a great day out it was, in jolly good company, with a jolly good Bratwurst to finish too. Recommended.
Posted by Mark at 06:54 4 comments: 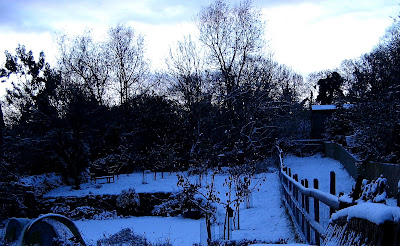 Early days I know, but it's already becoming clear that the 2010 cidermaking season will be remembered by many cidermakers for its Apple Lollipops, Pomace Slushies and Torpid Fermentations.
Here at Rockingham Forest Cider, we managed to avoid the misery and potential frostbite of Pressing during the big freeze, but the recent cold spell has played havoc with the performance of our delicate Wild Yeasts. All the later pressings of Yarlington Mill, Dabinett etc. have been extremely reluctant to show signs of life in the chilly ciderhouse. On one memorable early morning, we recorded a garden temperature of -11C, and though it's unlikely to have been this cold in the ciderhouse, I'm guessing the temperature will have hovered either side of freezing for the last few weeks. It would take a pretty hardy microbe to rouse itself for fermentation in these conditions, and so it's hardly surprising that none of them did. Bad Yeasts!
This ongoing lack of fermentation is a worrying thing for a cidermaker, so it came as a bit of a relief when last weekend's lull in the freezing conditions helped kick-start the last few malingerers into life. I'm now pleased to announce that it's a lot noisier in the ciderhouse, with all 25 fermenters finally fizzing and glopping away like ....err... big fizzy gloppy things. 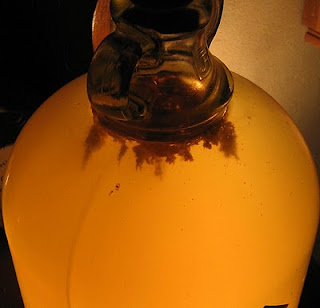 The imminent return of freezing conditions shouldn't be anything to worry about. Once a fermentation gets going, the process by which the yeasts convert sugar to alcohol (and CO2), also generates a little bit of heat, hopefully just enough to keep things ticking over. Even this little demijohn of Green Horse Perry (right) continued to ferment throughout the Nov/Dec freeze. Notice the strange 'alien' gloop floating on the top of this perry, a common occurrence with high tannin perrys, something to do with 'Polymeric Perry Tannins'... or something!
With everything now as it should be in the ciderhouse, it's high time we turned our attention to the serious business of Unbridled Christmas Pleasure. More of which later...
Posted by Mark at 14:30 2 comments: