Today was designated 'Homecraft Sunday', a day for baking our new-season Christmas cakes, and a chance to make a small impression on the troublesome 'Welland Valley Bramley Apple Mountain' (visible from space apparently!). Bramley Apples have very high levels of Malic Acid, and are therefore very difficult to make really good cider from, so we prefer to use them in pies, crumbles and cakes. Unfortunately, this year's poor weather has resulted in apples 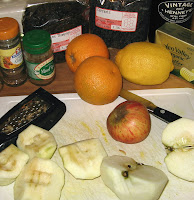 which are a little too scabby to keep well through the Winter, and it's therefore a race against time before they succumb to rot, fit only for the compost heap.
Karen and I both loves mince pies, who doesn't! For me, it's Karen's mammoth mince pie baking sessions, filling the house with their sweet and spicy aroma, which kick-starts the whole festive season. I do my bit by making the mincemeat... and eating the pies obviously!
This year I've used a recipe from The Big Apple's 3rd collection 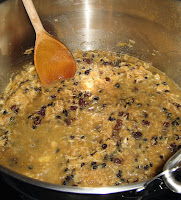 of Apple & Cider, Pear & Perry Recipes, a terrific little booklet produced by the Big Apple Association, 'a Herefordshire based group dedicated to promoting English orchards, apples and cider'. I've tweaked the recipe slightly, we like our mincemeat slightly sweeter than they do in Herefordshire.
900g Bramley Apples
Juice and grated peel of an orange and a lemon
500g mixed dried fruit
175g muscovado sugar 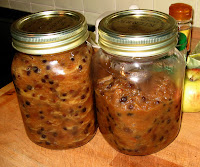 brandy. Bring to the boil and simmer gently for an hour. When thick and pulpy add the brandy, stir well and spoon into sterilised jars.
In the absence of any of our own I used a bottle of Henny's Vintage Still Cider, and topped it off with a drop of Zapiain Sagardoz, a rare cider brandy from Spain's Basque region. Is it too early for a batch of mince pies I wonder...
Posted by Mark at 13:02 No comments:

Today was a choice between watching the struggling England rugby union team play the mighty All Blacks in a cosy Uppingham pub, or a tedious racking off and blending session in the freezing cold cider house. On balance frostbite and boredom in the cider house seemed the most rewarding option...

The Rockingham Forest Cider which we pressed in October has almost finished it's initial fermentation. Most of the tubs are showing little or no sign of activity, and it's now time to top them up ready for the cold Winter months. I've been looking forward to this little job ever since we pressed the apples from John's beautiful old Cotswold orchard. I had a good idea that the apples we harvested were good cider varieties, it's not too difficult to recognise a bittersweet cider apple, they don't taste very nice, but it's only now that I can truly gauge their quality.

With the aid of the trusty Rockingham Forest Cider Chicken Baster, I sampled each of the 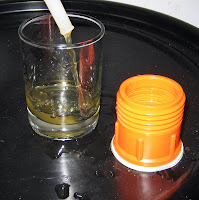 fermenters before topping up with one of the sharper blends of cider. The flavour is obviously a little on the raw side, and still largely dominated by yeastiness, but even so the rich bittersweet character comes shining through. I'm really pleased with the quality at this stage which promises to be even better than last year's vintage. Two of the tubs are still quite lively and sweet, and if anything these slow-movers show the quality of the blend even better.

I may have missed the rugby, but I can sleep safe in the knowledge that all is well in the ciderhouse tonight.
Posted by Mark at 09:28 No comments: 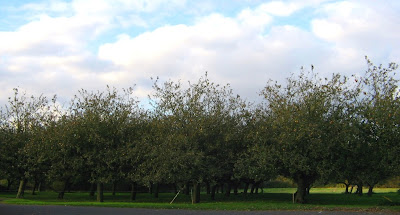 During the fruitful months of September and October, cidermakers become highly tuned to presence of orchard fruit. Whether it's keeping an experienced eye on their own orchards, or scanning hedgerows, gardens and fields for other peoples trees, cidermakers are always on the lookout for possibility of fruit going to waste.

When I spotted this beautiful old orchard adjacent to the Ram Jam Inn, I thought my luck was well and truly in. The Ram Jam Inn is an 18th century roadhouse located near the village of Stretton, just off the busy A1 in Rutland. It's more of an upmarket restaurant these days, but was once a hostelry of some renown. The unusual name derives (probably!) from '...a strange concoction brewed by the former Indian batman sergeant landlord' Charles Blake, which was bottled for the take-away trade.

The orchard is very neatly laid out in several straight rows, and apart from the overgrown and upright nature of the growth, nicely maintained. Unfortunately for me the trees appear to be all cooking apples, probably Bramleys, and of no use for our cidermaking. One man's disappointment is another's good fortune though. If you have a liking for apple pie, the Ram Jam Inn may well be the place to visit at this time of year.
Posted by Mark at 09:12 No comments:

The steady glop of fermentation has eased-off a little in the ciderhouse, and it's time for a spot of topping up. Vigorous fermentation should produce enough CO2 to purge the cider of harmful levels of oxygen, and being heavier than air should form a protective 'blanket' of gas over the surface of the cider. The most common faults in traditional cider, oxidisation and vinegar taint, can only occur when the cider is exposed to oxygen, so it's when fermentation slows right down and less CO2 is being produced that it's essential the ciders are under airlock and topped right up to exclude air.

I decided to use this as an opportunity for a spot of tasting and blending, which in turn led to 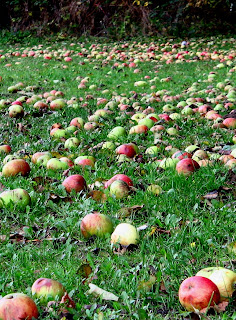 the first racking-off session of the season. I don't usually rack the ciders off the old yeast deposit (lees) until the new year, but the early dessert apple cider we made in September has just about finished fermenting and most of the sediment has now settled out, so I was keen to assess the different batches ready for blending.

Whilst pressing the eight different varieties of dessert apple which went into this cider, we tried to blend the fruit as we went. We were aiming for consistency across the separate fermenters, but the specific gravities, which ranged from a fairly feeble 1044 up to a more respectable 1051, gave a good indication of our lack of success in this respect. Interestingly the flavour reflected this quite accurately too, the higher gravity ciders were much fuller flavoured, and also a fair bit sharper than those with a lower gravity which tended more to a lighter fruitiness. It seemed sensible to blend these to give an average gravity of 1047-48, equivalent to an alcohol level of around 6.4% if fermented out to a dry cider.

I'm pleased to report that the perry, which was also topped up, has a very good, healthy aroma. So far, so good, the incantations appear to be working.

The picture has of course got nothing to do with the topping-up and blending, but gives a good indication of the current state of the village orchard. These fallen Bramleys made for a nice picture, though sadly they're too bruised to store well, and far too acidic for cidermaking, so the orchard floor is where they'll stay.
Posted by Mark at 01:11 No comments:

Cider Jar of the Month - Mannings 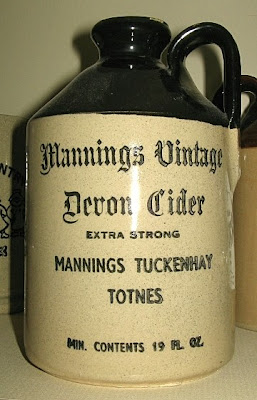 There's not a lot I can say about this long defunct Devon cider business. In common with most of the (presumably) successful regional cidermakers which were either swallowed up or bit the dust in the latter part of the 20th century, information is rather thin on the ground.

The only bit of history I've managed to dig up on Mannings & Sons is this website for Mallard Cottage, a self-catering business on the site of the original Mannings ciderworks in Tuckenhay near Totnes. There's a nice picture of an old bottle label, but little else to flesh out the story of Mannings Vintage Devon Cider.

What a difference a day makes... 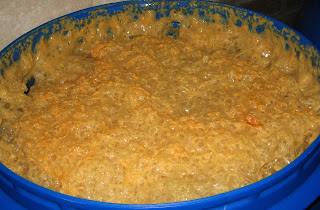 The Welland Valley Special has now joined the other ciders in a frenzy of frothing 'n' foaming fermentation. The additional yeast I pitched in appears to have had a dramatic effect. My job is done... for now.

There's still quite a lot of apples on trees around the village which I could press, but as most of it's high acid culinary fruit, unlikely to bring anything extra to the various blends of cider, I've decided to call this year's cidermaking session to a timely conclusion. The press has been mothballed until next season, and it only remains to organise the staff Christmas social...
Posted by Mark at 06:31 No comments:

There's always one isn't there! The Welland Valley Special is playing hard to get, dawdling behind the other happily fizzing fermenters and refusing to become cider. This will not do!

We pitched the yeast into this final batch of cider a week ago, and since then I've taken regular peeks under the lid in anticipation of the fermentation bursting into life. The initial signs of yeast activity seemed good, the tell- 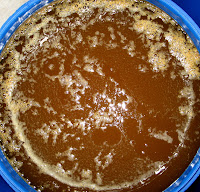 tale ring of tiny bubbles appeared within a couple of days, but since then it's all gone quiet. The nose is a good instrument to bring into play at this stage, any signs of yeastiness, or the sharp pain of a nose full of CO2 would give the game away. Even the unmistakably foul aroma of H2S (common in the early stages of fermentation) wouldn't neccesarily be unwelcome, but this particular tub has remained resolutely appley with no sign that it wants to turn cidery in any great hurry.

I confirmed the initial prognosis by checking the gravity with a hydrometer. It hasn't shifted from the initial 1047 of the freshly pressed juice. Oh well, no harm has come to it yet so I've pitched in a second dose of yeast and this will hopefully kick-start the fermentation. Back to peeking under the lid then...
Posted by Mark at 09:35 No comments: