What could be better on a sunny Summer afternoon, than time spent sipping & sampling at a local pub Beer Festival. Not much I hear you say. Well how about if the promised beer festival only goes and turns out to be a bloomin' Cider Festival. Yay-Hay-Hay!
Top Leicester pub The Western had billed their latest weekend event a Summer Holiday Beer Festival. True, there were a few beers on offer, but a glance to the right will 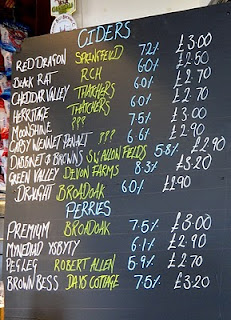 show that it was actually Cider & Perry that had the top billing. Result!

Not everything was worth travelling all the way to Leicester for, but there was just about enough to make the journey worthwhile. I found the Swallowfield Dabinett & Browns a very well balanced cider, as was the Penalt Capsy Wennet. The cider of the festival for me by a country mile was from Green Valley of Devon, a former CAMRA award winner, and on this form understandably so. A really deep, rich and juicy flavour, with just the right amount of Rum finish (subtle, not in-your-face). The sweetness is really well judged too, and not a bit cloying. Absolutely lovely stuff.

Talking of Rum finish, the cider I'm drinking now seems to me to have a bit of Rum spirit character, which is odd because as far as I know it isn't fermented or matured in spirit cask.

Ciderniks is a small-scale craft cidermaker based in leafy Berkshire. I picked up a bottle of their Combe Raider cider from White Dragon in Burton-on-Trent, and very good it is too. Fully dry, light in body, but quite full-flavoured in a West-Country way. There's a bit of 'Tang', and some pleasant 'woodiness', but it's the mysterious 'Rum' character that lingers longest on the tongue. So, is this cider showing a 'Bit of Spirit', or is it just 'A Rum-Do'?.... Oh I don't know! I'll get me coat...
Anyway, the Sipping & Sampling is about to get a whole lot more serious this week, with the arrival of the mighty-mighty Peterborough Beer Festival, just up the road in.... err, Peterborough. I'll be going tomorrow, meeting and greeting fellow cider drinkers (and cidermakers) from the three corners of the country, at what's considered by many to be one of the heavyweight champions of the cider bar world. More ciders and perrys than I can be bothered counting, all washed down with one of several 'Traditional Festival Downpours' booked for the day. 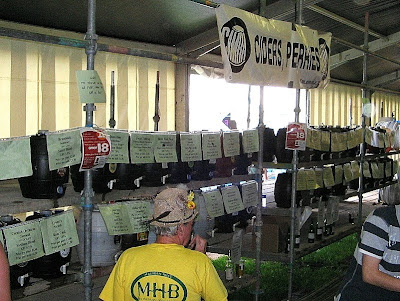 Yes, it's going to be a wet one with rain predicted throughout the day. Oh well, Cest-La-Vie. It's all under canvas anyway. I guess we can pretend we're propping up the bar at the Burrow Hill Cider Bus, knee-deep at that other notorious mudfest, Glastonbury Festival...... again!
Posted by Mark at 01:57