'Ahoy There!' It's very nearly the time when the good ship Rockingham Forest Cider weighs anchor, and sets sail on the choppy waters of the 2011 Beer Festival season. It's been a long, cold winter in dry dock, but we've not been idle. The barnacles have been scraped off the barrels, we're fully provisioned, and ready to cruise the highways and bye ways of the East Midlands and beyond. There'll be a cider in every port, and hopefully a girl in every cider. Yo-Ho-Ho! Shiver me Timbers! and that's quite enough nautical nonsense I think.

First up is bijou northern event, the Hucknall Beer Festival, opening its doors this weekend, and featuring all that's local and best in ale, ciders, and well-filled Cobs (that's Crusty Rolls to our more southern readers). There'll be local Torkard Cider, and we've sent along the very last box of our 2009 Rockingham Forest Cider (7%), and another of Malvern Hills Perry (8%). There's a Farmers Market on the Friday, live music on Saturday evening, and I've been assured there's absolutely no restrictions on the wearing of Flat Caps at this event, so go along and fill yer (Hobnail) boots.

Further on down the line is the annual Leicester CAMRA Beer, Cider & Curry Jamboree. Same venue, similar huge range of quality real ales, ciders and perrys. We're aiming to send barrels of Malvern Hills Perry and a sweetish Vilberie Cider, and we've been assured by bar manageress 'Zoider Zusan' that there'll be other local ciders available, including a smooth Torkard number, a Thirsty Farmer, and something rare and fruity from new boys on the block, Charnwood Cider. The full cider and perry list will 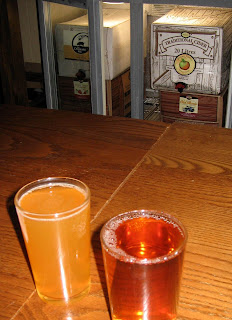 be 'broken' here, just as soon as we've persuaded Sue to give it to us before anyone else....


I figured it might be a good idea to get some practice in ahead of
all this festival activity, with a short trip to the Slug & Lettuce Beer Festival in downtown Leicester. Not a huge selection of ciders to be honest, but it was nice to see the range included something a little different to the usual from Orchard Pig of Somerset, and full-bodied organic Devon cider from Heron Valley. The ciders provided a bit of welcome interest in the flat ocean of Irish/Italian rugby mediocrity. We appear to be back at sea!
Posted by Mark at 05:42