Like the gridlock and panic of an English snow-flurry, the arrival of the Leicester CAMRA Beer & Cider festival is something we can both rely on, and sneak time off work for, every year without fail. For this we give thanks to the hard working organising committee, and small platoon of willing volunteers which make this annual jamboree run so smoothly, punctually, and most important of all, fragrantly. 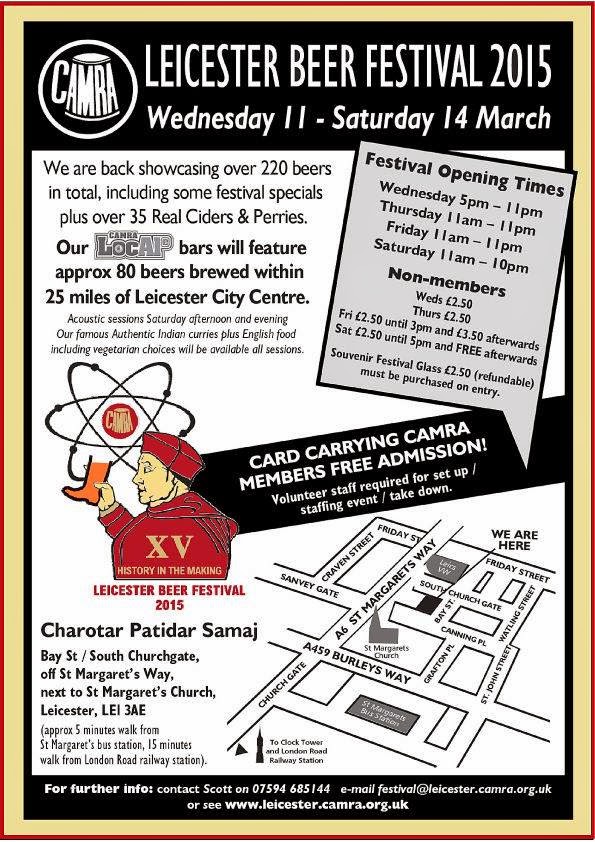 It's all reassuringly similar to successful festivals of the past, details of which can be gleaned from the flyer reproduced here. Over there. On the right.

Top cider and perry enthusiast Susan has assembled a collection of fruit-based drinks any medium-sized rock festival would be proud of, including many sourced so close to Leicestershire, they could quite accurately be described as being from... well, Leicestershire. Surrounding counties are well represented too, with only poor old Warwickshire absent. And Staffordshire.

Exclusive early access to the cider and perry list is something I've come to rely on. Lord-knows I've got little else to blog about on here these days. And in time-honoured fashion, I've not hesitated in breaking the trust Susan has placed in me, by sharing everything I know with you the reader. So here it is, the 2015 Cider & Perry list, as usual, subject to change without notice or excuse.

UPDATE: Susan has 'finessed' the cider list, the latest version uploaded here. Some notable changes, including the sad loss of early-season Torkard which is so early-season it may still technically be apple juice!