Time for a Swift One 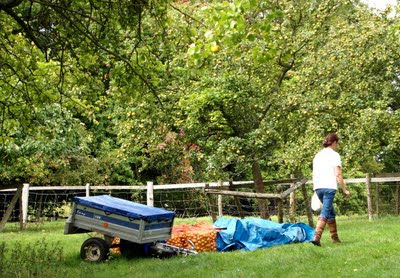 In between the arduous task of harvesting a trailer load of perry pears, and the equally hard graft of milling and pressing them, I managed to find time for a mini cider crawl in the tourist hot-spot of Broadway. All work and no play as they say...

First a refreshing Cup'O'Tea, kindly supplied by the owner of the orchard we'd been bending our backs in for the last few hours. While we chatted, Johns wife dug out a few old photos of the cidermaking from back when my Voran press was still under warranty. It's good to see these old photos, which feature a spectacularly quiff'd John, his father the original cidermaker, and Ted, an old boy from the village, milling and pressing in the ciderhouse as it's always been done. It's represents a nice bit of continuity as we're now using the same press, and harvesting the same orchard as John was over 20 years ago, and his father before him. With Johns permission I'd like to reproduce a few of these on the Blog some time.

Tea refreshes up to a point, but real thirst requires something a bit stronger, so into the village for a pint of Hogans Draught Cider at the Horse & Hound, our usual lunchtime refreshment venue when working in the orchard. This pub is also handy for several top quality charity shops, so something for the ladies too. 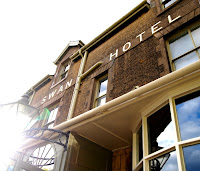 Onwards to the smart and bustling Swan Hotel. Always busy it seems, and very popular with thirsty tourists. I retired to the patio with a pint of Aspalls Draught Cider, a great vantage point to watch the world crawl by whilst basking in what may well prove to be the last of the Summer sunshine. Beer options here include the excellent Purity Brewery Pure UBU, which is what I'll usually have when I'm not drinking cider. 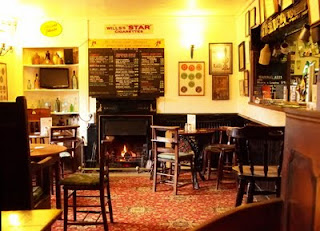 My final destination was the ultra-cosy Crown & Trumpet, tucked away off the main drag and all the better for it. Popular with visitors to the village, but still a proper locals pub, and always very welcoming even when busy.

The beers are generally all from local brewers, including Cotswold Spring, Stroud, and Stanaway, but I was here for the local ciders. Hogans Draught Cider is a long standing regular, but occasionally during the Summer there's also something from Gwatkin of Herefordshire. The bottled cider and perry in the fridge were a little too sweet for my taste, but on handpump was a fresh barrel of Silly Ewe, a new-ish dry cider from Gwatkin. Properly dry, and surprisingly full-flavoured for a cider of only 4.5%.

There's much to admire in the Crown & Trumpet, not least the unusual range of traditional pub games on offer, which apparently include Evesham Quoits (otherwise known as Dobbers!), Devil among the Tailors, and the rarity shown in this picture, Ring the Bull. Perhaps not quite as sophisticated as our beloved Northants Table Skittles, but a game of some skill nonetheless. It definitely warrants a return visit in the hope of catching a competitive game in full flow. At the very least it's a chance to try more good ciders in one of our favourite Cotswold pubs.
Posted by Mark at 15:18