Blakeney Red - Yields Down, Gravity Up 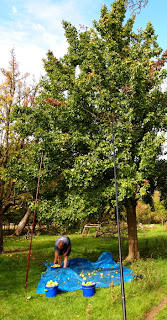 Our Perry merry-making continues. This time it's the Blakeney Red pears that need our attention. The orchard has (or had) three Blakeney Red trees, good annual croppers, and more compact than the huge old Malvern Hills trees making them so much easier to harvest.
Sadly, as with many of the trees in this elderly orchard, the Blakeneys are not in the best of health. In fact one of the three trees appears to have given up the ghost this year. We've noticed die-back on the odd branch before, not necessarily a fatal situation, but the whole tree now appears to be either dead, or having a very serious rest! I think that an already struggling tree may have been pushed over the edge by the extremely dry Summer we've had this year. John will be leaving the tree in for the time being, just in case it shows a spectacular recovery next year... 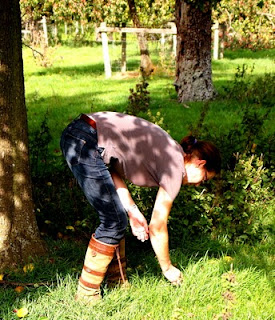 So, only two trees harvested, which is a great shame as the Blakeney Red Perry was probably our most popular drink this year. Even so, we've come home with a similar quantity of pears to the Malvern Hills, and managed to press almost 50 gallons of juice from them, which is a little less than last year. I think the pears were close to a peak of ripeness. Larger than usual, mainly yellow and still quite firm, but perhaps not as juicy as the Malvern Hills. The sugar levels are similarly high, with a very respectable specific gravity of 1.060, the highest we've recorded for Blakeney Red by a long way. It's that dry Summer again I think. 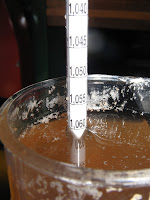 A quick scan of the orchard revealed that the Green Horse perry pears are almost ready for harvest, once again around 1-2 weeks earlier than last year, so we'll be hard at it again this weekend.
Posted by Mark at 12:32