We came over all Spanish again last night. Calamares Fritos (Fried Squid), big juicy Gambas (Prawns) sautéed with plenty of Ajillo (Garlic), and our current garden glut, Habas (Broad Beans) with Chorizo and a rich tomato and olive oil sauce. All washed down with a bottle of Spanish Sidra Natural (Cider). 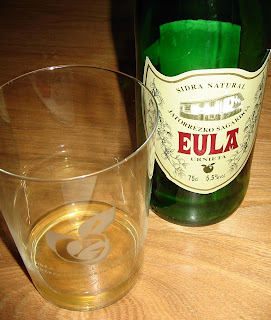 The sidra is one of a precious few bottles which remain from our last holiday to Spain. I can't remember where we bought it, possibly on a day trip to San Sebastian since the ciderhouse, Sidrería Eula, is located close to the city.
Cider from the Basque region of Spain is typically quite robust in flavour. The traditional bittersweet and bittersharp apples used give a cider which is similar in style to that from the English West-Country. What makes Basque cider different is the tendency to let the cider acetify a little, giving a sharper, slightly vinegary edge. I've had Spanish ciders where this has gone a little too far and the cider has been unpleasantly acetic, but at it's best the process adds complexity and depth of flavour, whilst still being a refreshing drink. The traditional pour with the bottle held above the head, and the glass at waist level, aerates the cider, and helps to lighten the flavour experience.

I didn't risk the traditional pouring method, choosing instead to decant the cider from the sediment into a jug and pour from a more modest height into my thin-glassed sidra glass. I'm pretty hopeless at pouring the correct way, and this bottle is too precious to go spilling it all over the floor. It's an excellent full-bodied sidra, and when combined with the aroma of sizzling Calamares, Garlic & Prawns, makes me yearn for a holiday on the North coast of Spain.
* Txotx is apparently the plug/stick/bung, or possibly the little tap found in the huge Chestnut barrels used to store and mature sidra. This is where the fresh, new-season cider is drawn off in a thin jet during the highly sociable Spring sampling sessions. The term Txotx is now synomomous with this ritual, and is shouted aloud whenever a new barrel is tapped in the ciderhouse.
Posted by Mark at 02:28