Feast for the Senses

Cider to the left of us, cider to the right. It was a tough call whether to visit Barry, Liz and their team at the Cow & Plough Cider Festival, or try somewhere totally new to us at Thurning Feast. Exceptionally fine weather, and other important business to attend to in 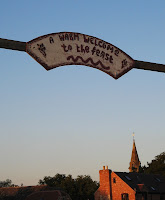 Oundle meant Thurning won the day.
Thurning is a bit of a drive for us, so we took the opportunity to visit a pub on the way, the excellent Kings Arms at Polebrook. The Kings Arms is a picture-postcard thatched village pub, which specialises in Spanish Tapas, and usually features beer from the nearby Digfield Ales brewery (a nice pint of Shaklebush on this occasion). A winning combo for us, and we'll definitely be returning to give the tapas a try in the near future. 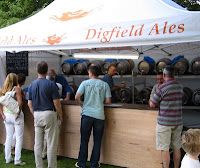 On to Thurning for the Feast, and straight to the Digfield Ales beer tent for a refresher. The full range was on offer, March Hare and Fools Nook were my preference. There were also a couple of beers on the other bar, and our barrels of Rockingham Forest Cider and Sulgrave Orchard, both of which seemed to be selling rather too quickly. Perhaps we should have brought some more! We managed to get a sneak preview of the tapas from the Kings Arms team who were running one of the food tents at the Feast. The Paella was very good, but the Chorizo & Butter Beans were outstanding, we need the recipe please! 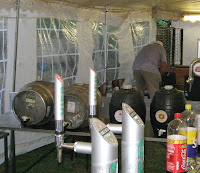 Munching on tapas and guzzling ale, we had a great view of the action on the main stage. There were vocal harmonies from the terrific Delicateers, and Appalachian Clogging from a group who's name escapes me now. They were terrific too.

A really grand night out, congratulations to all the people who helped put Thurning Feast on. We'll be back next year, possibly with a bit more cider.