Work has moved up a gear in the village orchard now that the weather has turned clement. 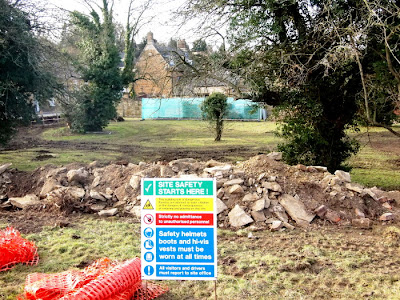 With the brambles now all cleared from the perimeters, perhaps the most striking difference is that it looks so much bigger. So much so that the remaining trees look quite sparse against the expanse of orchard floor. Now this is important because one of the ongoing plans for the orchard is to plant a few extra fruit trees, and I'd been wondering whether there was really room for them. I can see now that a few well positioned saplings will eventually help give the space a more traditional orchard feel than it perhaps has at the moment. 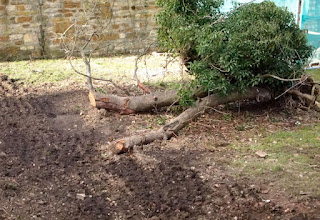 Another major alteration has been the removal of the apple tree which fell during high winds a few years ago. Despite the fact that this tree has still cropped regularly since it was blown over, it was hard to see how a felled tree like this could remain as part of a more accessible orchard. 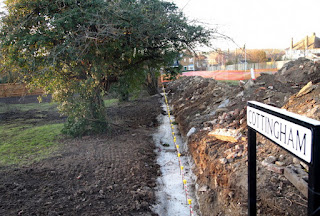 Footings are now in place, and the bricks from the demolished walls have been cleaned up ready to rebuild the walls along two sides of the orchards boundary. Presumably there are not enough usable reclaimed bricks to reinstate the rear wall, and this has now been replaced with a new timber fence.
Posted by Mark at 02:16