All Play, No Work 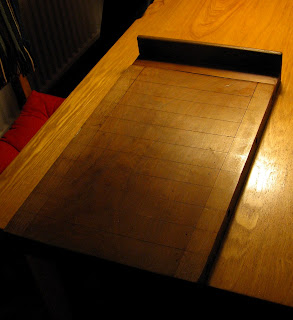 Now isn't that a thing of woody beauty. Actually it's a bit tatty around the edges, as befits a thing with a good bit of age and some robust competitive usage. There are one or three suspicious looking holes in the timber too, and the end piece could do with a bit of glue... but beauty is in the eye of the beholder, and as polished bits of wood go, this one's a real looker.

It's not, as you'd perhaps be mistaken for thinking, a Shove Ha'penny board. No, this is a much rarer plank, and the result of a thoroughly local bit of carpentry too. This is a Push Penny board, a game played almost exclusively up the road in Stamford, and something I'd hoped I might find on my travels, without any great expectation it must be said.

The game itself is very similar to Shove Ha'penny, and similarly rooted deeply in pub culture. The main difference in play is that instead of the usual five Half Pennys shoved up the board, three old Pennys are used, which being that much larger mean the beds on the board are a fair bit wider too. Traditionally, the three coins are smoothed on one side, and each coin will have a slightly different thickness, adding an extra element of skill to play.

I'm really looking forward to a game, though there could be a short delay before the first Shove-Off. Not only am I embarrassingly short of old Pennys, but the lengthy process of smoothing and polishing the coins ready for play is not a job I'm particularly looking forward to!
Posted by Mark at 11:02