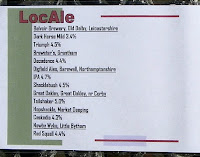 It's been a mixed-bag of a May Bank Holiday weekend. A little bit of sunshine but rather too cold for comfort, and of course predictably wet today. We've put the usual business of cidermaking on the back burner this weekend and put our cider-drinking hats on instead. Call it Research & Development, though sadly not tax-deductible!
First up was the LocAle festival at the Jolly Brewer in Stamford. A fine selection of locally brewed beers, augmented by our own LocApple ciders. The sun was shining at this early stage of the weekend, so I celebrated with a 'quality-control' half of

Rockingham Forest Cider whilst soaking up the rays out-front of the pub. Pick of the ales for me was the Barn Ale from the Tydd Steam Brewery near Wisbech. At this point I'd like to make it absolutely clear, just in case there might be any confusion, that our ciders are made from 100% pure apple juice, and contain no Orchids whatsoever!
Today's 'Grand Day Out' to the Elton Society Village Fete was more of a 'Damp Day Out', but luckily we managed to find a dry 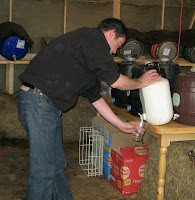 spot in the spacious tent of the Crown Inn Real Ale & Cider Festival, which was in full swing in the village centre. The pub is well worth a visit any day of the week, but particularly when the beer range has swollen to around 30, plus a very reasonable range of real ciders and perry. I was more than happy to re-acquaint myself with a half of Hereward Dry, an award-winning cider produced as a sideline to the Hereward Brewery in Ely. I last tried this cider at the 2007 Leicester Beer Festival, and must say that if anything it's improved since then. There were also draught ciders and a perry from Biddenden, Thatchers, and Westons, but I decided to try a delicious fruity Mild and a floral, hoppy Golden Ale instead, though can't remember what they were called or who brewed them. It's a good job this isn't a beer blog...
Coming Soon: More opportunities to drink real cider and perry (hopefully in the sun) at the 3rd Castor & Ailsworth Beer & Cider Festival (14th - 17th May), and the Northampton Beer Festival (28th - 30th May).
Posted by Mark at 11:19