Cider Jar of the Month - Taunton 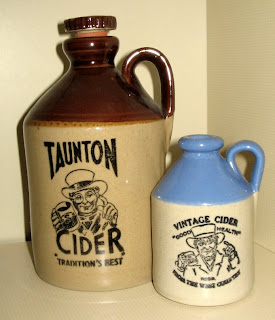 A slightly topical stoneware cider jar this month, what with Taunton's recent 'ruffling of feathers' over a reduced strength and sweetened up Blackthorn Cider. Taunton Cider Co founder, the Rev. Thomas Cornish, is presumably spinning in his grave, though never having liked Blackthorn myself it's hard to see what all the fuss is about.

The Taunton Cider Co were at one time the only serious competition to Bulmers dominance of the UK cider market. Blackthorn and Autumn Gold were their principle brands, both industrially produced ciders in direct competition with Bulmers own Strongbow and Woodpecker. By 'industrially produced' I mean ciders which contain a relatively low percentage of apple juice, possibly as a concentrate rather than freshly pressed, and often bulked out with sugar syrups, colourings, and artificial sweeteners. The antithesis of a pure juice, craft produced cider.

The Taunton Cider Co is now a somewhat reduced entity as part of the massive Constellation Brands Co, and as the news item above suggests, their 'ciders' are now principally distributed to a loyal customer base in the West-Country. Bulmers and Magners seem to hold sway nationally, though another sub-division of Constellation is more widely represented through the various Gaymers brands.

The days when the Taunton Cider Co would have produced the kind of full-juice ciders which may have been sold in these stoneware jars, are sadly long gone. Only the 'pseudo-real' cider Taunton Traditional has any pretence to authenticity, and in my experience even this 'cider' falls way short of the full-juice, craft product. If it's a reasonable quality cider you're after, we have to turn again to the Gaymers division who put their name to one or two interesting bottled products, notably the Orchard Reserve and County series of ciders available through supermarkets. 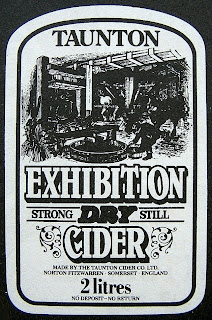 So what manner of cider would have been sold in these (probably not so very old) jars. David Mabey's book Good Cider (1984) lists a couple of possible candidates. Special Vat was in those days a strong, medium dry cider, available in bag-in-box as well as the more usual bottles and cans. Exhibition is described as a strong, still cider, so could also have been available in stoneware.

Which brings me to the slightly scary gentleman, holding forth with his glass of cider and an accusing finger on the front of these jars. Could this be the Rev. Thomas Cornish, the man who having started making cider in the 19th century, set up the mill at Norton Fitzwarren which would later become Taunton Cider? He certainly appears to be in full preaching mode. Perhaps he's warning about the folly of chasing quick profits at the expense of quality. Amen to that!
Posted by Mark at 09:47