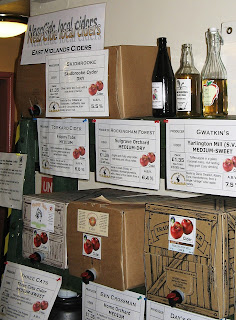 Sometimes the search for a decent pint of cider means going the extra mile, or in the case of this year's Mansfield Beer & Cider Festival, around 75 extra miles by bus, train and foot. That's 150 miles as a round trip, and something like 4 hours of journey time, so was it worth the trek?

Well yes, I'd say it was. Mansfield CAMRA cider enthusiasts Ray & Gail had put together a very fine range of ciders and perrys, with a particular focus on local East Midlands producers. This was the main point of interest for me, that and the chance for a good gossip with Ray!

I tried a bone-dry, but very drinkable cider from Lincolnshire producer, Skidbrooke Cyder. This cider would be great chilled on a hot Summer day, and great with food. Ray & Gail's own Hucknall Cider Co Floppy Tabs was a more complex, medium cider, very well balanced and I think this will get even better as the year goes on. The Three Cats Medium/Sweet was quite a young cider, and a little too sweet for my taste. Even so, I was surprised at how pleasant it was, and this will also improve when given more time to mature.
Venturing further afield I tried ciders from Day's Cottage in Gloucestershire, Sarah's of Herefordshire, and Springfield, a Welsh producer. I think the Springfield was the pick of the bunch for me.

Ray reports that trade was brisk over the weekend, and the cider bar had completely sold-out just short of closing time on Saturday. Another successful event, and one I was more than happy to attend, and supply cider to.

An added bonus for me was the 4 hours of largely uninterrupted reading time on the train to and from Mansfield. A rare treat, much like the Mansfield CAMRA cider bar.
Posted by Mark at 09:39