It's a Tannin Thing

I've been comparing and contrasting our two current ciders, Sulgrave Orchard and Rockingham Forest Cider. Perhaps the most obvious difference is in their appearance. 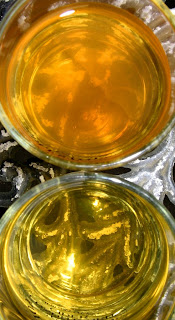 The Sulgrave Orchard Cider was made from a blend of several different varieties of dessert apples. It's pale yellow in colour, and now virtually crystal clear in the glass. In contrast, the Rockingham Forest Cider, which was made from a blend of mostly cider apples, has a very slight haze, and a rich golden colour. In my experience, ciders made from cider apples are often a little hazier than those made from dessert and culinary fruit. I'm not entirely sure why this should be, possibly something to do with the higher levels of pectin in cider apples which can lead to a natural haziness in the finished cider. The colour difference is a little more easy to explain, it's down to the presence of Tannin.

Cider apples are split into four main classifications, Sharps, Sweets, Bittersharps and Bittersweets. It's the latter two that we are particularly interested in, since the 'bitter' part of the classification refers to the high levels of tannin in the fruit. This is the flavour compound which gives West-Country ciders their distinctive rich flavour, but it's also the part which turns the apple juice a deep brown colour when freshly pressed. Fermentation seems to purge some of this oxidised tannin from the juice, but it's the tannin which remains that gives our cider it's attractive golden colour.

Here's my tasting notes from this evening's sampling, though do bare in mind that these ciders are still quit young, and the flavour will change and mellow throughout the year. Also, the current batch of Rockingham Forest Cider contains a higher percentage of sharp fruit than later batches will have, and is perhaps more of a halfway point between the two styles than a pure West-Country style cider.

Sulgrave Orchard Cider (6.4%) - Pale yellow like a white wine in appearance. The flavour is intensely fruity and full flavoured, but the citrusy sharpness makes for a refreshing drink, particularly when chilled. The finish is long, fruity, and the sharpness lingers on the side of the tongue. There is a slight residual sweetness.

Rockingham Forest Cider (6.4%) - Deep golden colour, sharp and fruity. Quite dry, with some astringency from the tannin. Much less sharp in the finish. A mild spicy bittersweet character, quite well balanced and easy-drinking.

You can try this current batch of Rockingham Forest Cider at the Red Lion, Middleton; and the Criterion Freehouse, Leicester. Both ciders should also be available this weekend at the Jolly Brewer, Stamford.
Posted by Mark at 09:40