Perry, And All That Jazz Pt.1 - Once Upon A Tree

I've been mulling-over a post about Perry for quite a while now. I've got an awful lot of the stuff in the ciderhouse at the moment, proper vintage perry made from top-quality Worcestershire grown perry pears. Perry that's turned out as good as anything I've made before, and we've been drinking quite a lot of it recently as well as cooking with it and giving a fair bit away. Which probably explains why it's been on my mind...

Perry at its very best is a drink that needs all the promotion it can get. It's a rare old drink that despite the continuing efforts of some world-class producers, and a handful of switched-on pundits and drinks journos, has singularly failed to ignite interest in the way that 'craft' beer and cider has in recent years. Of course there are compelling reasons why Perry may never achieve the profile that enthusiasts such as myself think it deserves. Perry pears are simply not grown on a commercial scale these days. For the most part it's a small-scale 'artisan' passion, a tradition kept alive by the smaller commercial cider and perry makers and teeny-tiny enthusiasts like myself. Most of the fruit used by these small-scale producers comes from very old trees, often solitary behemoths dotted around the old farms of the Three Counties area. Difficult to harvest, and some of these trees are literally hundreds of years old and hence approaching the twilight of their productive lives. Some new planting of Perry Pear trees is going on, but if Perry as a traditional high-quality drink is to survive, maybe even thrive in the future, a lot more needs to be done, and that means creating a demand for the drink that makes it a commercial proposition for growers and producers.

So I was looking for maybe half a dozen good quality perries to eulogise about from the comfort of my own home. No dodgy commercial stuff, no Pear Cider, and for my taste, nothing too sweet. Perry has something of a reputation for sweetness. A reputation that can make it a difficult sell for some. Maybe it's memories of Babycham! More likely it's that too many producers 'do' have a tendency to over-sweeten their perries (and their ciders!), and 'far' too many festivals and pubs routinely shy away from the drier styles that do exist. Having said that, it's a fact that some perries do finish fermenting with a degree of sweetness. That's because many pears have quite high levels of non-fermentable Sorbitol in their makeup. My own perry has a touch more natural sweetness than I'd like if I'm absolutely honest, but it's certainly not 'sweet'. 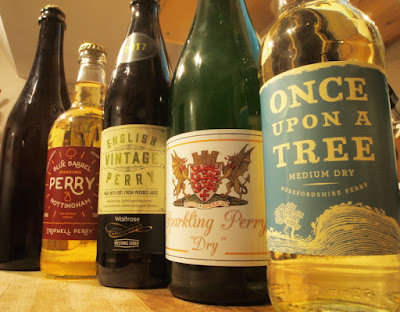 So, I just wanted some good perries to help demonstrate the variety and quality that's on offer. To show what most people are undoubtedly missing. Well that proved to be much easier said than done!

When you make your own, and therefore have hundreds of litres to hand at the turn of a tap, you forget just how difficult it is to get hold of proper pure-juice Perry outside of the Three Counties area. In fact for some people I'd imagine it's not so much a difficult task as an impossible one. If you fall into this category, the answer is of course the 21st century miracle of online sales, of which there are several offering a good range of perries. I resorted to the tried-and-tested method of 'going-west' in search of the best that the Three Counties can offer, and tapping friends and colleagues up for a few freebies of course... 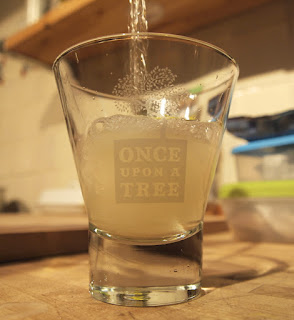 Once Upon A Tree - Medium Dry Herefordshire Perry (5%)
So where exactly 'is' the centre of the cider and perry making tradition? A question that's vexed me for several hours now, and one guaranteed to rouse fierce debate amongst those who care about these things. Which is of course why I ask...

Putley and the Marcle Ridge area of Herefordshire could certainly lay claim to the title (if there were one), located as it is within a dense forest of old and new orchard plantings centred on the regional giant, Westons of Much Marcle. Home to the annual Big Apple cider and perry trials jamboree, which is a gathering place for some of the finest producers in the business, a significant handful of which harvest and squeeze their fruit locally.

Simon Day of Once Upon A Tree is one such local producer. A winemaker by trade, he's been building an enviable reputation for his fine ciders and perries since establishing the company in 2008. I got in early, supplying his draught Tumpy Ground cider to the Raunds Beer Festival back in 2011. Once Upon A Tree ciders and perries are some of the more easily found in the Three Counties area, their bottles a relatively common sight in delis and farm shops which is where I got mine from. In Warwick! 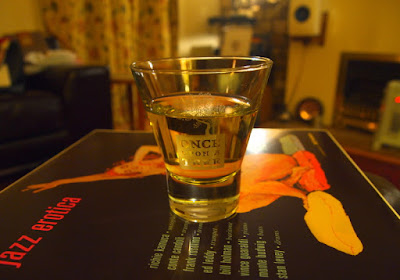 This perry is a bit of a sparkler, pouring (from a great height) clear and significantly less sparkling, which is how I like it. It carries the Protected Geographical Indication label for Herefordshire Perry, ensuring the fruit was sourced entirely from the aforementioned county, and much else of a reassuring quality mark besides. Quite what will become of this PGI when we've dumped ourselves out of the EU is anyones guess, but given the absurd and frustrating regulations around cider in this country (practically anything goes so long as it's had an apple dipped in it at some point!), any promises of a UK replacement should probably be regarded with deep suspicion...

The perry is a rich, sweetish, medium-dry sipper, as befits a drink made from a high percentage of freshly pressed juice. I get ginger beer and barley sugar, Melon and citrus, and a slightly vinegary tinge that mellows to tongue-tingly sherbet. I've paired this zesty sparkling perry with the cool West Coast Jazz classic, Jazz Erotica by Richie Kamuca and friends (Jazz Track JT1024)*

*Music pairing for guidance only. Other styles and genres are available.
Posted by Mark at 08:55