Wibble Wobble, Perry On A Plate 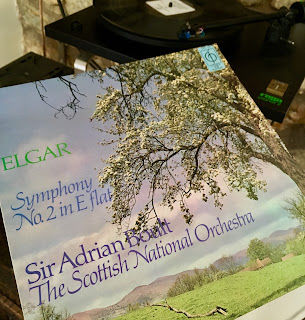 Since knocking the whole 'selling our cider and perry' thing on the head, we've found that there's an entirely 'expected' benefit. We've got more cider and perry than we can possibly drink in a season, more than we're likely to drink in several seasons in fact. What to do with it all then...

Well, we do drink a bit, and give away a bit to those who also like to drink a bit. There's still a fair bit left though, so we're never afraid of adding a bit to the Sunday pot-roast, a soup or two, maybe the odd cake or pudding. That still leaves a fair bit though...

Other things that we have more of than we can deal with at the moment are Bramley Apples, Quince, Rosemary, and Leaves. Loads of leaves. All over the place. Which brings me to our latest garden glut-busting recipe, something tasty to go with the Sunday Lamb, and requiring three items from our current over-supply situation. 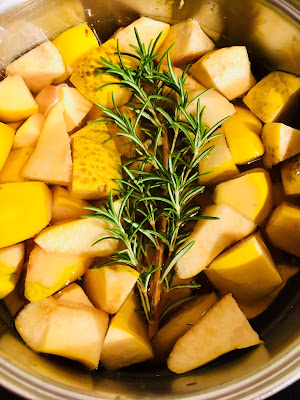 This recipe can easily be adapted to use apples of course, it's just we have Quince. Lots of Quince. Quarter 4-6 Quince depending on size, and remove the core. Opinions vary on Quince pips, some say include everything, others that they can give an upset tummy. I don't like the taste of pips and can see no good reason to include them.
Chop the quince up into chunks and put in a large pan. Pour in just enough liquid to cover your chunks, water is fine, Champagne might work, but we used our own Medium/Dry Perry for extra orchardy flavour. I wouldn't recommend using anything that's artificially sweetened though, and given that you'll be adding sugar later it's probably best to stick to something drier in style.
Add a Sprig of Rosemary and bring to the boil. Simmer for 30-40 minutes until the Quince is tender. Mash the whole lot until it looks like the mush below. 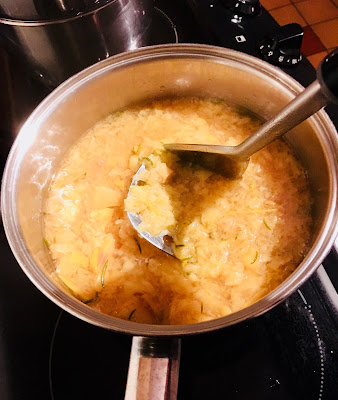 We're making jelly now, so you're going to need a jelly bag or some muslin to drain the Quince mush through, as shown below. Leave it to drip for a few hours, there's little point in leaving it overnight to be honest, it'll simply attract vinegar flies for very little extra juice gained. I'm sure there's something that thrifty jelly-makers could use the mush for, perhaps a batch of Membrillo, but we used ours to enhance the aroma of our compost bin! 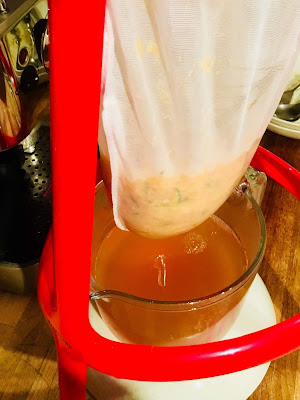 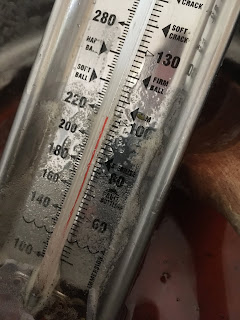 You now need to add Sugar, 450g for every 600ml of juice you've got. We ended up with exactly 600ml. Heat the juice until it starts to boil, then add the sugar stirring to dissolve. Now opinion also vary on the type of sugar to add. Quince being fairly high in pectin already, many favour ordinary refined sugars. We erred on the side of caution and went for Preserving Sugar (not Jam Sugar, that's too high in pectin). At this point add another Sprig of Rosemary, leaves stripped off the woody bits and finely chopped.

Now for the difficult bit. You need to get your liquid up to temperature and hold it there for 10 minutes. 105C is the setting point, and if your cooker is anything like as crap as ours you'll struggle to achieve this. Persevere. Good luck! 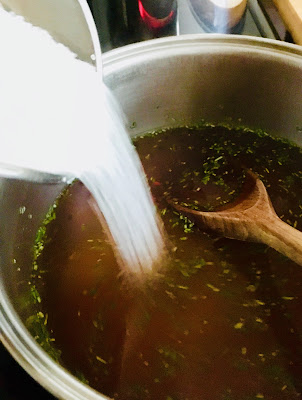 It's at this point the dangerously hot syrupy jelly-in-the-making will turn a lovely shade of pinky-red, like an autumn sunset in a Worcestershire Perry Pear Orchard. Speaking of which, we made our jelly to the strains of Elgar's Symphony No.2 in E flat, Sir Adrian Boult conducting the Scottish National Orchestra. The album sleeve for this recording features a lovely photograph of a Perry Pear orchard in Worcestershire, overlooked by the brooding Malvern Hills. Seemed kinda appropriate...

Jar-up, push a small sprig of Rosemary into each jar, label, and wait for Spring Lamb to appear in the shops. 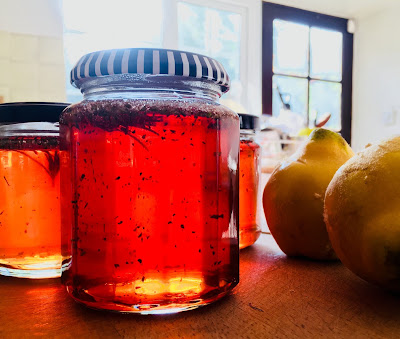