The Uppingham Fete, Flower and Produce Show comes around but once a year, which is just as well in my opinion. Winning prizes at this level of competition takes some effort. Late nights bottling and baking, early mornings straightening carrots and polishing Marrows. It takes real dedication, even without the aid of a hangover the size of Rutlandshire (more of which later...). So was it worth it?

Well, yes and no!

It's certainly true that the High Sheriff of Rutland will awake tomorrow wondering where half the county's silverware has gone. Three of the coveted Flower Show Cups have now been smuggled across the border to a small village in Northamptonshire. We're particularly pleased to have retained the Mathews Rose Cup, but we also won the Uppingham Home Produce Association Cup, and the mighty Uppingham Flower Show Cup for the most points in show. There are of course many Cups, but there's only one Uppingham Flower Show Cup. It's a kind of 'One Cup' to rule them all, and rest assured, we're keeping it safe, keeping it secret...
﻿﻿
﻿The downside of all this is that I won't be getting my name on any of this hard-won booty. Each year we take it in turns to 'own' the entries, and this year it was Karens turn. Her name, and her name only, will be inscribed on the silverware for all eternity. Bah! Not Fair!

Anyway, back to that epic hangover, brought on by a late-late night of fried Lough Neagh Eels, Chucklehead Cider, and an all-you-can-drink Wot's Occuring buffet in a secret location in Cottingham. Bad is it was, it could have been so much worse. The polite offer of a decadent dip in the Hot Tub was intriguing, but very sensibly declined. Another day maybe... 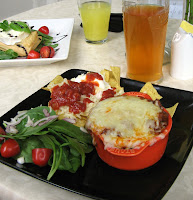 Hangovers like these need a jolly good feeding, so once the early morning business of delivering Karen's entries to Uppingham had been accomplished (I'm not bitter, honest...) , it was off for a bit of cosy comfort food. The Veranda Cafe Bar at Wing Hall provided the cure with homemade Cheese-topped Beef Chilli with Nachos (and 'stuff'), washed down with a restorative pint of Rockingham Forest Red Kite Cider. Goats Cheese Tart with Salad (and 'stuff') for the ladies. Both equally delicious, though for a hangover I can only really recommend one of the above... with cider of course!

We took the opportunity to deliver more of that Red Kite Cider to the Farm Shop and Cafe today, so they won't be running out any day soon. I'll also be delivering some of our Green Horse Perry in time for the live music session next Saturday (featuring multi-talented local muso-legend Chris Conway in cool Jazz mode). Karen will be available for autographs, and photos with the Trophys during the interval.
Posted by Mark at 15:14