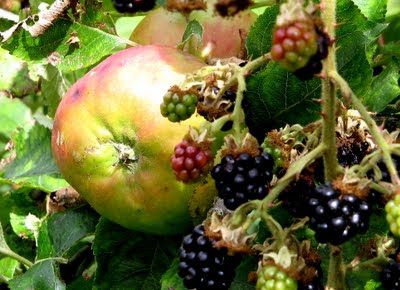 If you haven't already noticed, the Blackberry season is well and truly upon us. To be honest, I hadn't noticed myself. It's thanks to sister in law Susan that I'm now on the case Blackberry wise. Thanks Susan.
Not that I'm a big fan of the common-as-muck Bramble. I'm more of a Raspberry man myself. A far more noble berry to my taste, and besides, I've been digging the barbed blighters out of the orchard ever since we moved to Middleton. It's a free harvest though, and I'm all for exploiting natures bounty, so I've been for a little Bramble Ramble across the road to the village orchard, plastic tub in hand.
Picking Blackberries is a Summer ritual as old as the hills, and it's important that we get the basics of the tradition right. Only the darkest, juiciest, least worm-infested specimens will do. Shorts and a light-coloured T-shirt are the traditional costume, all the better to collect scratches, nettle stings, and an artful selection of ruinous purple stains. You could of course wear more protective apparel. A nice pair of Black Chinos say, or maybe a long Woollen Skirt. You could also buy your Blackberries in tiny plastic trays from Sainsbury! Come on. It's Summer. Live a little... 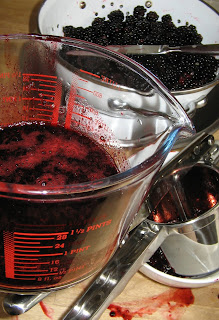 I've decided to experiment with my Blackberry booty. I've also decided to shamelessly follow the current hot trend in cidermaking, and make a 'Fruity Cider'. It's what we do here at Rockingham Forest Cider. Bandwagons jumped-on, dignity not an issue, no frivolous trend too small. Fear-not though 'Real Cider' fans, we won't be making enough to sell. It's just for personal interest, and besides, the duty payment is far too large for a cidermaking minnow like ourselves.
I've taken as inspiration the excellent Sandford Orchards Fanny Bramble I tried at the Criterion Cider & Cheese Festival. A cider of modest strength, but chock-full of smooth Brambly loveliness. It's not a cider though is it. More a pint-drinking country wine. Nevertheless, I liked it a lot, and it's only natural that I want to slavishly copy it.
I started with three samples from the Rockingham Forest Cider cellar. A sharpish, scrumpyish blend which I'm currently enjoying (Sample #1); our Red Kite Yarlington Mill Cider (#2);  and some Green Horse Perry (#3). The Blackberries needed juicing, a horribly messy task best done whilst Karen was busy elsewhere! You may need a bottle of bleach at this point...
I was aiming for something balanced, with plenty of berry flavour, but still distinctly a cider. The first thing I needed to do was find the optimum blend of cider/perry to Blackberry Juice. After some trial an error, I decided that two thirds cider to one third juice gave the best initial balance. From there it was a case of assessing the three different samples with varying levels of sweetness. So here are my hurriedly scribbled notes (Karen was due back any minute):

Sample 1
Unsweetened: Reasonable berry flavour, but too sharp and cidery. Tannin showing too.
Sweetened slightly: Good balance of berry and cider. Less sharp and more integrated tannin. Nice
Sweetened quite a bit: Like a berry cordial. Not enough cider, too sweet.
Sample 2
Unsweetened: Good balance of berry and cider. Smoother and less sharp than sample 1. Pretty good.
Sweetened slightly: Excellent blend of cider and deep berry flavour. Lovely stuff.
Sweetened quite a bit:  Like sample 1 but less sharp.
Sample 3
Unsweetened: Pear, citrus, slight berry finish. Odd flavour to this, not nice.
Sweetened slightly: Better, but perry flavour dominates. Little berry flavour.
Sweetened quite a bit: Just tastes like sweet perry with a very slight berry finish.
So, there you have it. The lower acidity of the Yarlington Mill cider works very well with the Blackberries, although the sharper cider is good too. Perry and Blackberries just don't hit it off at all. I'll be bringing a bottle of the most succesful blend to the Peterborough Beer Festival later this month, where you're likely to find me propping up the cider bar on Thursday afternoon. Do feel free to ask for a sample if you like that sort of thing.
Posted by Mark at 13:24