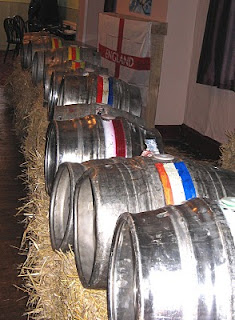 The ciders and perrys have been delivered, the beers are all tapped and almost ready to go, and a whole bunch of new Bus Stop signs have mysteriously appeared in the village. It must be Welland Valley Beer Festival time again. Here's some last minute....

Our 'man-in-the-know' reports '...all buses fit and ready to tackle the infamous Rockingham - Cottingham hill climb...' before adding 'The Wheels on the Bus Go Round and Round...' Hmm! 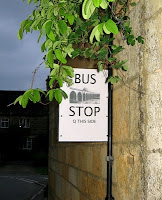 Reports of an early morning explosion in the sleepy village of Middleton have been played down by Red Lion licensee Kevin Barby. 'It was just the Beer Talking' was Kevins somewhat 'enigmatic' response. Rumours that the Red Lion will be offering a free 'Beer-Shine Shampoo & Set' with every pint of Wot's Occuring this weekend have been described as '... absolute b*****ks'.
Posted by Mark at 13:39