The usual orderly approach to Christmas Day has been anything but orderly this year. The late-late cidermaking hasn't helped, neither has an untimely flurry of real work following a Summer of bone-idleness. Suffice to say that the Christmas spirit has arrived very late this year...

Things are really kicking off now, which is just as well since it's less than a week before the big day! The tree is up, there's snow on the ground, and I've finally got round to making the Christmas Cake and Pudding.

Ho, Ho, Ho I hear you say, far too late to mature properly for Christmas Day. Stir-up Sunday, the traditional day to make your Christmas Pudding, came and went on the 22nd of November. Ha, Ha, Ha, I reply, it's not a problem when you're still eating last year's cake, and the pudding recipe I've used is a cross between a plum pudding and a steamed sponge cake. No maturing necessary, and I give you the recipe here because it's never too late to steam-up your kitchen for Christmas.

I've taken inspiration for the pudding from the accurately named 'Farmhouse Cookery', a veritable treasure trove of Irish recipes, produced by the lovely ladies of the Ballylennon Presbyterian Church, County Donegal. A full three quarters of this book is devoted to baking, which is as it should be. Play to your strengths that's what I say... So a tip of the hat to Anna McKean of Rateen, St Johnston whose recipe I almost followed to the letter.

For a medium sized pud, beat together 110g Butter and the same of Soft Brown Sugar until fluffy, or your arm succumbs to tennis-elbow. Add One and a Half Eggs, 40g 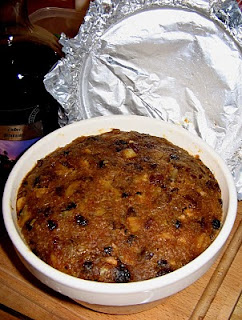 Plain Flour, 25g Chopped Almonds, 110g Brown Breadcrumbs, a tsp of Mixed Spice, and a Quarter tsp of Baking Powder. Stir around a bit then add 350g Mixed Fruit which includes mixed peel, along with a peeled, cored and diced Cooking Apple. Things will have got pretty dry by now, so add the juice and grated rind of Half a Lemon, along with 2-4 tbsp of Sweet Cider, I used the same Henny's 2008 Vintage Cider which I recommended for the Cheese Board. Stir very well and transfer to a well buttered pudding bowl. The pud will rise by an inch or so, so cover with foil tied in such a way as to allow a little expansion, and steam for 3 Irish Hours (maybe a little less, maybe a little more, check with a skewer to see whether it's cooked through). When it's done, allow to cool a little, then pierce all over with a skewer and drizzle as much Cider Brandy or Calvados into the pud as you feel necessary. Quite a lot in our case!

Being made with butter rather than suet, this pudding will probably not keep so well as a more traditional, heavy plum pudding, though the Brandy should help.
Posted by Mark at 03:40

Do u have to reheat this pud before eating like traditional pudding? Dying to try this out!!

Yes, microwave is easiest or the traditional steaming method. Treat exactly the same as a traditional pud (Brandy Butter, Custard, Cream, whatever), it's just a lighter and fruitier texture.