Tomorrow (Dec 5th) for one hour only (11am -12 noon) it's Tree O'Clock, a world record attempt to plant the most trees in one hour. A worthy project, and part of the wider National Tree Week which aims to promote the planting of trees in the UK, and the appreciation of trees in general. If you were thinking of planting a tree this Winter, it's not too late to buy one now and make a pledge to plant it tomorrow on the website. Don't forget to take a picture of the planting though, or it won't count towards the record attempt.
Sadly I won't have time to plant a tree tomorrow, I've made a little pledge of my own to Karen... The Christmas shopping has been put off for far too long, and a trip to the pretty market town of Stamford is apparently 'non-negotiable'. If you happen to be in Stamford tomorrow and spot a sulky looking middle-aged tramp in a wax jacket and bushman's hat being dragged around the M&S gift dept... that's me that is... Bah-Humbug!
Ok, so we won't be part of the record attempt, but that hasn't stopped us planting a couple of trees today instead. Of course the planting of a tree itself is the important bit, world record attempts!... well they come and go. I was once a record holder... along with the rest of the pupillage at our secondary school way back in the early 80's. The Dying Fly was all the rage back then, made popular by the mighty Tiswas team, and we proudly held the world record for this somewhat dubious practice for maybe a week at most... Inevitably, another school out-flyed 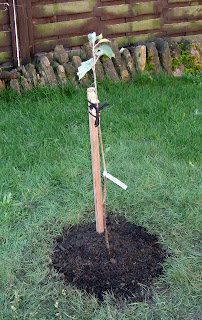 us, the gimlet-eye of fame moved on to another star-struck secondary modern, and that was that! I don't think we even made it into the Big-Book itself. Such is life.
But I digress. It's tree planting time, the moment our grafted apple trees have been waiting for all Summer long. First in was the Calville Rouge D'Hiver, a dual purpose apple variety, originally from France where it's still found in some gardens. Calville is a name given in France to a range of apples which exhibit a heavily ribbed, crowned shape, and the flavour of this apple is described in the New Book of Apples (Joan Morgan & Alison Richards) as being 'Sweet, fruity with little richness, almost aromatic; soft, white flesh'. It also cooks to a 'lemon puree...' which sounds nice. This tree is on a semi-vigorous rootstock, MM106, which will eventually give a fair size tree, so I've used it to replace the Birch tree which outgrew it's welcome near the house. 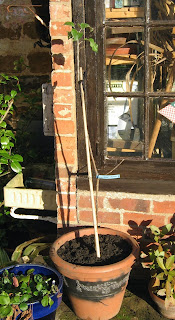 The other tree which I've 'planted' is Scarlet Crofton, a dessert apple with a 'Striking dark red flush, under network of russet' and a 'Sweet, almost scented taste'. This apple is possibly of Irish origin, a tip of the hat to my ancestry. The tree itself was grafted onto M27 rootstock, a very dwarfing rootstock, perhaps only really suitable for pot-grown trees which is where this one has been planted. It will need staking for it's entire life, and cropping will be relatively small, but hopefully we'll end up with an attractive specimen for the patio in a few years time.
There are other trees to plant out, including a Dabinett which I'm hoping to train as an Espalier against a stone wall, but these can wait a few weeks until the Christmas rush is over. With the cidermaking finished, racking of the ciders not until January, and the latest round of pruning still later, the month of December brings a welcome break in the cidermaking year. From now until Christmas, we're getting festive, and this blog aims to be less about cidermaking, and much more about cider drinking. Wah-Hay!
Posted by Mark at 05:06