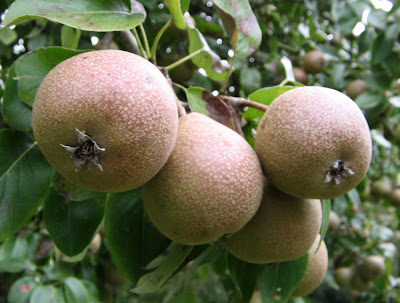 The unpleasant taste is the result of very high tannin levels in perry pears, sometimes so high that the fruit needs to be milled a few days before pressing to help the tannins 'soften' through oxidisation (known as Maceration). Of course it's the tannins which make perry such a fine drink, and the reason why 'ordinary' dessert pears are not nearly so good for perry making.

The perry pears we pressed a couple of weeks ago were pretty tannic, though not so high that they needed to be 'macerated' to reduce the tannin. These Moorcroft pears are renowned for producing an excellent perry, though it's a difficult pear to make perry from owing to the very short time between ripening and the fruit rotting. In common with many varieties of perry pear and cider apple, Moorcroft pears go by several names depending on where they're grown. When grown in Worcestershire they tend to go by the name Malvern Hills or Malvern Pear for obvious reasons. Choke Pear is another name which perhaps reflects the tannic nature of this variety of perry pear.

Another less common name which has come to greater prominence in recent years, is Stinking Bishop, also the name of a highly regarded artisan cheese made by Charles Martell in Gloucestershire. If you've ever come across this rare soft cheese, you'll know the reason for it's unusual name. During the ripening period, the individual cheeses are regularly washed in perry made from the Stinking Bishop pear. This gives the cheese a unique 'sweaty socks' aroma which certainly lives up to it's unusual name. On the face of it, perhaps not a great advert for Moorcroft Perry, but strangely enough the perry itself is light, floral, and perhaps one of the finest you're likely to come across. So whither the pong?

The quantity of Moorcroft pears we pressed was not that great, and the resulting dry pomace was only sufficient to fill two small sacks. We normally send our pomace off to Keythorpe Rare Breeds as feed for their lucky free-range pigs, but this batch was a little too small for the journey and therefore sat for a few days outside waiting to be disposed of with the green waste. After a couple of days in the sun, the Stinking Bishop moniker started to become all too clear. The smell was overpowering, even the vinegar flys were avoiding the sacks. I dread to think what the bin-men were thinking when they emptied our green bin this week!

We're off to Worcestershire again this weekend in search of Blakeney Red perry pears. Another great pear variety, with the potential to make really excellent perry, though formerly used to dye soldiers uniforms Khaki.... Hmm!.... At least it won't smell so bad.
Posted by Mark at 13:22