Yesterday was the first day of our annual October cidermaking week, an exhausting round of milling, washing and pressing which should ultimately lead to a ciderhouse full of busily bubbling fermenters. The day went reasonably smoothly, and progress was steady. Today has been a well-earned rest day. 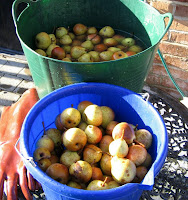 Worcestershire orchard we visited last weekend. We knew there were several old perry pear trees dotted throughout the orchard, including several of the highly regarded varieties Blakeney Red and Moorcroft (sometimes known as Malvern Hills), but with many Three Counties perry makers reporting very poor crops this year I wasn't expecting much from these ancient specimens. By commercial standards the crop was indeed pretty poor, but our more modest production levels made the meagre crop just about worth harvesting.

We came away with around three sacks of ripe pears from three or four different trees, and we appeared to have two distinct varieties. Pears of all types have a tendency to be at their optimum ripeness for only a few short days, 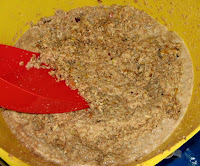 quickly going from hard-as-nails to mushy-with-rot before they can be put to use. These pears were no exception, and it was crucial that we process them as soon as possible.

Most perry pears are high in tannin, but some are so mouth-puckeringly tannic that the resulting perry could be virtually undrinkable. Tannin levels in pears and apples can be reduced by a process called 'Maceration' which involves milling the pears then leaving the pulp to stand for several hours prior to pressing.

We decided not to macerate these pears, Blakeney and Moorcroft don't fall into the 'massively tannic' category, and are regarded by some as relatively easy pears to make perry from. Welcome news!

After our experiences pressing dessert fruit in September I was sure these (by now rapidly over-ripening) pears would surely clog up the pressing cloths and make a right mess of the racks. I worried needlessly, these pears milled to a fine porridgy consistency, and pressed beautifully. We didn't manage to completely fill the press, but did manage to extract a similar

amount of juice to that of a full pressing of apples. The spent pomace was very dry and we managed to almost fill one of the smaller 70 litre fermenters. All in all, we like pressing perry pears very much!

Prior to pressing these pears I spent a bit of time researching the process, and one thing which cropped up time and again was just how much of a lottery perry making can be. Following all the rules is sometimes not enough on its own, you may also need a little bit of luck. Even a well-made perry can turn vinegary or develop other faults at the drop of a hat, so as novice perry makers we're hoping for a little bit of good old fashioned beginners luck to hover over this particular fermenter.
Posted by Mark at 13:05