So many beer festivals, so little time. Our cider and perry has been (almost) everywhere this weekend, from the cosy environs of our village local the Red Lion, to the vast expanse of canvas and casks at Delapre Abbey, home of the excellent Northampton CAMRA Beer Festival. I can't be everywhere though, much as I'd like to, so the Newark CAMRA Beer Festival got the dubious benefit of my custom on Friday. 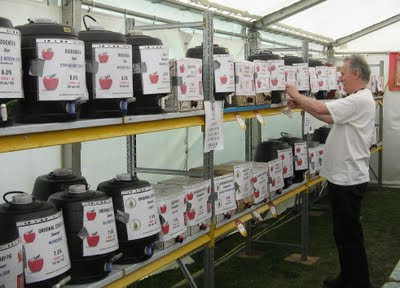 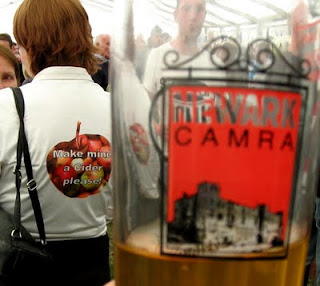 I haven't been to the Newark beer festival for the best part of a decade. I recall the festival then was in the grounds of the castle, a slightly bawdy affair, which must have been good because I can't recall much more than that to be honest! In common with all CAMRA festivals, the Newark event has developed into a very professionally run festival, and a firm fixture on the local social scene. Live bands, good food, and of course a wide range of ales, ciders and perries are the theme of the weekend, all housed in a chandelier-hung luxury marquee close to the castle and rail station. It's a hassle-free affair, which is just how I like them.
The cider bar at Newark has a really good mix of well-known national brands and high quality craft producers, including a few local rarities for 'enthusiasts' like myself. This was my first opportunity to try Moorland Farm Cyder from Yorkshire. Their Medium/Sweet was the winner of the inaugural East Mids & Yorkshire CAMRA Cider Competition in 2010. I tried the Medium/Dry, which was clean and very well made, with a nice peachy flavour in the finish. Sandford Orchards is another 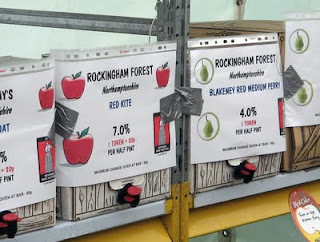 CAMRA award winner, taking gold in the 2010 national competition at Reading. Their cider is a smooth, high tannin west country blend, well deserving of the accolade in my opinion. Local award winner Torkard Cider had three ciders at the festival, as well as their two cidermakers propping up the bar! Pick of these was their Floppy Tabs which had a good balance of zingy sharpness and full fruity flavour, with a little more of the peachy flavour in the finish. I also tried ciders from Udders Orchard, Green Valley, Lyme Bay, Sarah's, Sheppy's and a quality control half of our own Red Kite Yarlington Mill Cider. I have to say that once again the pick of the bunch for me was the peerless Alpaca Perry from our friends at Ross Cider & Perry in Herefordshire. Something similar from Ross will be available at the Red Lion during the forthcoming Welland Valley Beer Festival in June.
Posted by Mark at 03:34