The cider bar at the Northampton CAMRA Beer Festival has gone from strength to strength since a relatively modest start at Delapre Abbey in 2006. We're sending around 60 gallons of cider and perry this year, which may sound quite a lot, but if last year is anything to go by, don't be too surprised if one or all have sold out before Saturday. That's not to say the cider bar itself will be sold out, there will be plenty of other good ciders and perrys available, but possibly not ours, and my advice is to go on Friday for the very best range. I'll be propping the bar up during the Friday session, and may have something interesting in my pocket for sampling so do stop me and try one if you like. Here's what we'll be sending:
Rockingham Forest Cider (Med/Dry) 7.2%
Rockingham Forest Bulmers Norman Cider (Med) 6.5%
Rockingham Forest Perry (Med/Dry) 5.6%

Newark CAMRA are having their well-established Beer Festival on the same weekend as Northants, which is a shame as I'd have liked to have gone to both. Rockingham Forest Cider and our Blakeney Red Perry will be available here, as well as a range of ciders from our friends in the north Ray & Gail of Torkard Cider. 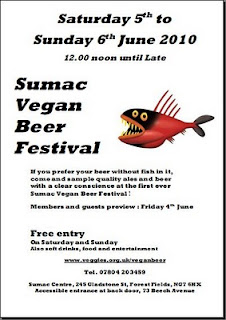 I don't know many details on this one, but Ray & Gail of the aforementioned Torkard Cider have strongarmed some of our own cider and perry for a Vegan Beer Festival in Nottingham (5th - 6th June). Ciders like ours are of course entirely free of animal derived products, though it's perhaps inevitable that the odd Wasp may have found its way into the juice at some point. We can certainly guarantee that no animals were hurt in the making of our ciders and perrys (just humans), and if anything did die in the making, well, it surely died happy...

Further on down the line, we've noticed that the dates for the Criterion Cider & Perry Festival have been changed to 19th - 25th July. You can't shake us off that easily Russell. Change the dates as often as you like, we'll still be delivering our cider and perry whether you like it or not.

Meanwhile, our cider continues to be available at the Red Lion, Middleton, and Wing Hall Farmshop and Cafe-Bar. We hope to bring you up-to-date news of the forthcoming Welland Valley Beer Festival just as soon as anything interesting reaches our finely tuned ears.
Posted by Mark at 03:25