Cider sales at Rockingham Forest Cider have gone from nought to sixty in less than a week. The first sixty litre fermenter of our new Sulgrave Orchard Cider has been racked off, barrelled up, and shipped out. Two barrels have been delivered to the Charotar Patidar Samaj for next weeks Leicester CAMRA Beer Festival, and another box is destined for the Red Lion, Middleton, a welcome return to our village local. It's an early start to the season for us, but no sooner have we broached the first batch than orders have started to trickle in for more of the same...

The Criterion on Millstone Lane has recently been announced as Leicester CAMRA's Pub of the Year for 2009. This is the third year on the run that Russell and his team have won this prestigious award. The winning combination of fine ales and ciders, excellent pizzas, and a warm welcome have made this a hard act to follow, and we'll be helping with the celebrations by delivering a box of Sulgrave Orchard Cider later this week. We hope that this should be available during the Leicester Beer Festival weekend.
Hardy northern folk Ray & Gail of Mansfield & Ashfield CAMRA, are also keen to secure a 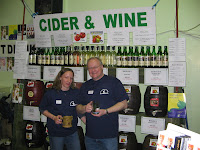 box of our cider for the forthcoming Mansfield Beer & Cider Festival. Ray & Gail are also the formidable team behind the Hucknall Cider Co, producers of the multi award-winning Torkard Cider, a true taste of locally grown Nottinghamshire fruit. I think it's safe to say that these two know a thing or two about cider, and I hope they like our Sulgrave Orchard Cider, a genuine Northamptonshire cider.

We're also currently looking into the possibility of supplying our cider to another highly regarded Leicestershire alehouse. More details soon...
Posted by Mark at 13:51